Today I’m going to be reviewing of Ivon by Michael Aylwin (duh.) and then interviewing him which is super exciting as it’s the FIRST EVER interview on this blog!! Let’s go!

Note: I got a copy of this book through Net galley in exchange for my honest opinion. All opinions are my own and no one else’s. 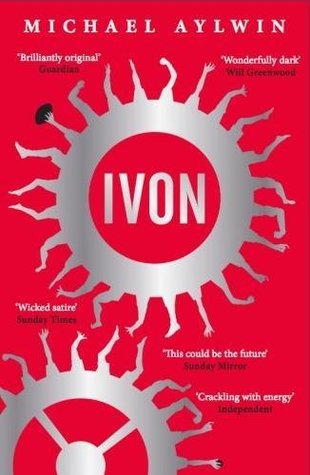 by Michael Aylwin// The year is 2144, and the world is powered by sport – politically and practically. Each community owes its prosperity or otherwise to the success of its teams and athletes. A person’s class is determined by their aptitude for sport. Once their useful life as an athlete has expired, they are placed in stasis at an age predetermined by that class. But not in Wales. Separated from the rest of the world by a huge wall, the Welsh still play games for joy. They play, they carouse, they love, they die. They have fun. Of all the Welsh, the greatest sportsman is an unreconstructed genius called Ivon. When the chance arises to become the first Welshman to cross the great divide into England, he cannot resist. His parents, exiled from England before he was born, know what London will do to him. They are desperate to have him back. But London will not give up an asset like Ivon so easily. Rating:⭐️⭐️⭐️.5 (3.5 stars)

I was really curious about this book as I love reading dystopian books and this seemed like something I’d like. The plot and the fact that it was based around sport intrigued me as I hadn’t heard of anything similar! It took me sometime to get into the book as it was quite confusing at points- I lost the plot at times and had to reread certain areas. However, once I got my head around it, Ivon was really interesting!

I found Dusty’s character super intriguing! The way he slowly changed and found out about what had happened to him in the past was really interesting. It was cool seeing the way he thought as he’d been influenced by the Perpetual Era! Ivon was also cool and his passion for sport was evident! Personally, I couldn’t connect to him and therefore feel indifferent about him.

The ending made me feel really sad because I kind of knew that it would happen but not entirely, I guess? It was really well written and was a strong ending for the book!

I gave this a 3.5 because it was really interesting and the comparisons of Wales in the Lapsed Era and the Perpetual Era were detailed! I don’t think I’d read it again though and it was confusing at points! Ivon is a Dystopian/ Sci-fi book with a focus on sport!

I loved reading Michael’s answers as they give really good advice and insight into the book! My questions are in bold+ italic and the answers are in normal text!

1. Which fictional book/world would you like to live in?

I’d like to live in Dr Frankenstein’s gaff, before it all went wrong for him.

First got the idea in the mid-90s and jotted a few thoughts down on a couple of sheets of A4, which bear only passing relation to what I ended up with. Then went away and enjoyed myself for 15 years or so, because it all felt too much to get my head round. Finally, in 2012 I wrote a book for an iron-man triathlete, the gist of which was never accept limits to what you can achieve, etc, and I thought, she’s right, and if I don’t write that book now (I’d also recently turned 40) when will I ever write it… So I sat down and wrote what is now the prologue. And it still is the prologue, bar the odd cut/tweak, which I believe is quite rare.

3. Were any of your characters inspired by real people?

I have a school friend who is the physical model for Ivon, the main character. And, the more I think about it, the more he was than just that. He has/had brilliant blond hair, practically luminescent, and he was a brilliant sportsman who loved life too much to become a pro, which he had the talent to. I raided South African rugby for some of the names (if you are ever stuck for a name, look there, and in the credits for American TV shows). Dusty Noble, the other main character, is actually the name of a relatively obscure South African rugby player. And then there’s the inspirational figure presiding over the book, but I can’t mention who, because it would be giving it away.

4. Do you try more to be original or to deliver to readers what they want?

When you start off without any readers there’s no way of knowing what they might want. I’m aware the ending is not as people would expect, but after the idea it was one of the first things that came to me – and like the prologue it hasn’t changed since it was first written.

5. Do you have any writer friends?

I’m a sportswriter by trade, so, yes, there are plenty of authors among that lot. Not so many novelists, but there are a few. Richard Beard was a mentor for the writing of Ivon and is a brilliant novelist and friend. And an old mate from school is a successful screenwriter, who has brought a few other writer friends to the party.

6. Was there anything you edited out of this book?

Quite a lot of exposition about how the world ‘worked’ was cut. That’s a problem for anyone writing a dystopia/science fiction – how much time do you spend portraying your world and how it works, or, better still, how can you portray it while making it feel part of the story? Brave New World, for example, upon which the basic storyline of Ivon was based, shamelessly opens with someone giving some children (and therefore the reader) a tour of the hatcheries, explaining how everything works, and then another giving them a history lesson about how we get there. In 1984, a history book is reproduced word for word doing the same. I’m not sure you’d get away with that these days, but a certain amount of exposition needs to take place regardless.

7. What kind of research do you do, and how long do you spend researching before beginning a book?

I did a lot at the start on trying to find a scientifically sound apocalyptic disaster to bring about the world of Ivon. Unfortunately, my idea of an oxygen crisis was poo-pooed by all the experts I approached. I remember getting quite upset about it. And wasting an awful lot of time, because in the end I put the backstory into the words of a slightly deranged old man, so we are left to fill in any gaps ourselves. The research question is always a tricky one, even more so for non-fiction, which I’ve done more of. At some point, you’ve just got to throw it all away and dive in.

8. Did you come up with the title first or the story?

The story. The title arrived by degrees. For a while I actually considered calling it Ivor. Then I made the crucial connection, which is eventually revealed in the book.

9. Which part of the writing process do you enjoy most?

Getting on a roll (which happens all too rarely in novel-writing – or does to me, anyway) and being visited by a pleasing turn of phrase.

10. Any tips for aspiring writers?

Ivon was published on 8th February 2018. You can visit its Goodreads Page here. And buy a copy from here.

CHAT WITH ME! Have you heard of this book? Does it sound like something you’d like? Which sci-fi/ dystopian books are you excited for (I really  want to read The Darkest Minds!)? What’s your favourite Autumn drink? Also, thoughts on cake This is very very important???