It’s that time of the week again when I am finishing up my post last minute and you are eagerly waiting with snacks to be enlightened by my pineappley awesomeness and wisdom™  Today, I am going to be reviewing the super awesome Liquid Death by Mitzi C! Let’s go *swishes hands and tries to be cool*

Note: I got a copy of this book through Net galley in exchange for my honest opinion. All opinions are my own and no one else’s. 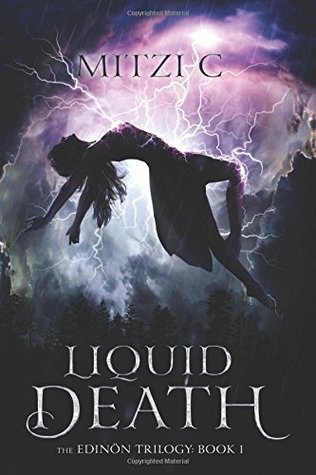 by Mitzi C.// HER BLOOD COULD SAVE THE WORLD…
KANDI is a 19-year-old girl who harbors extreme social anxiety as a result of past torture and certain uncanny abilities. The last place she wants to be is anywhere near people. JUAN is an 18-year-old boy born to an underage, single mother. His dreams of a brighter future were crushed when he was arrested for killing his father. (Read more at Goodreads) Rating: ⭐️⭐️⭐️.5 (3.5 stars)

When I first saw this book, I was unsure as to whether I would like it or not. The cover was quite dark and personally, I wasn’t a huge fan of it (I’m a super picky person!) but the blurb drew me right in! As soon as I started reading, I was enthralled. Every twist and turn was unexpected and interesting and I loved the journey this book took me on. Liquid Death was a wonderful read. I felt passionately about most of the characters and the story line was really interesting! I would recommend this book to anyone who likes sci-fi (especially concerning blood and mutations and powers). It was a great read but it did have some flaws. I’m not completely sure I would read it again either so I gave this book 3.5 stars! A great read but I wasn’t completely amazed/heartbroken/emotional (key things that make or break a book into becoming favourites for me). Liquid Death is a YA Science Fiction book.

Most of the characters I discovered were great and really fun to read about however, something I found quite conflicting throughout the book was that Kandi is literally already unbeatable. Not only can she not die but she’s a genius, she can teleport and she also has a whole bunch of other powers as well?! Her mental health is the only thing stopping her and I think it’s great that the representation is a key part of this book as we need more diverse books in 2019. This representation of mental health and trauma may be relatable to quite a few people. I can’t comment on whether the representation was completely accurate or not but I think the fact that that was literally her only weakness (even thought it is a major weakness) is annoying. Kandi was also annoying for me because later on the book, instead of using her powers, she just like prolongs things? Which is, frankly, quite stupid.

Jim is the most disgusting, foul creature and does not deserve anything. I can’t even express my hatred in words. The way he treats Kandi is atrocious and I sympathize with her. I would be TERRIFIED of touch if anything like that happened to me even ONCE and Kandi has had to suffer so many times. “The threat is all in his maniacal eyes” I feel so much for Kandi. No one should have to live with this.

Juan is an ABSOLUTE CINNAMON ROLL AND I ADORE HIM. He felt for Kandi the first time he saw her and was ready to beat up whoever had hurt her even though he hadn’t even talked to Kandi before. That is so sensitive and kind  “I want to torture whoever inflicted her with that nasty bruise”

Kandi’s father Oops, kinda forgot his name honestly terrifies me, like he doesn’t yell but he’s quietly so manipulative. He acts like he deserves to hurt Kandi and what he’s doing is not horrific?

Okay. Brock. At first I thought Brock seemed really sweet- a great best friend who’d been through a horrible time. Then. I realized he was insane. Especially considering what happened to his parents was BEFORE he was given the drug and his powers.

I honestly feel terrible for all the patients. Their mistreatment is so unjust and infuriating. It’s horrific to think people go through these kinds of things.

Time the Edinön was pretty cool but really random as well? Like he came to help but then he left immediately? I feel like he was just quite convenient at that point and didn’t really have much of a purpose.

I loved the use of flashbacks as it let me get to know Kandi and Juan and their past better whilst still learning about them in the present. I was completely enthralled by the mystery of Sunny Days. You have no idea as to what exactly is going on and it’s really clever how we’re fed bits of information slowly throughout the book but the pace is not too slow that the reader gets bored. The writing and characters were generally great and while it was slow at the start the ending was super interesting! The epilogue was also really intriguing but I’d kinda forgotten who was being talked about so…

It sounds cool though and I can’t wait to see what happens next to Juan and Kandi!

Liquid Death was published on 8th January 2016. You can visit its Goodreads Page here. And buy a copy from here.

CHAT WITH ME! Do you like reading Sci-fi? Do you think you might read this? Any Sci-fi recs? How’s your week going? Any snacks you want to share? (I may or may not offer you pineapples) DIVULGE YOUR SECRETS!!

7 thoughts on “Liquid Death by Mitzi C- A REVIEW// Full of powers and mutations!”